Magento is a free open-source e-commerce application based on PHP and MySQL. The script was first released by Varien Inc. on March 31, 2008. However, a former CEO of the vendor sold a big share of the company to eBay which finally spun off the company and between 2011 and 2015 the project was developed under the eBay’s X.Commerce initiative. On November 3, 2015 Magento has been announced as a fully independent company due to the fact that eBay left the project due to changes in the high level staff.

The script gives online merchants the opportunity to build fully responsive and great looking online stores with a lot of functionalities for better customer experience. It is distributed in a couple of different versions and we will now shed some light on each of them:

This is the completely free open-source variation of the script. It allows the users to modify the core files and implement additional modules and functionalities from third party vendors. The latest available versions of Magento Community Edition are 1.9.3 and 2.1.5 (the version which we will cover later on in our tutorial). This version is appropriate for start-up ecommerce projects and companies.

This version of the application is divided from the Magento Community Edition and it is not a free one. It has the same core files but it is equipped with more features and built-in functionalities. It is appropriate solution for large businesses and include technical support. The latest version of Magento EE re 1.14.2.4 and 2.0.4.

This is the self-hosted version of the script that is announced in April 2016. You are provided with the same functionalities but also with a real-time CDN and monitoring.

This is a variation of the application that is quite different from the other releases. There are changes and improvements in the built-in feature, developer tools and the overall architecture of the code. The backend of Magento 2 is more user-friendly and intuitive in comparison with Magento 1.x.x. Additionally Magento 2 provides fully responsive deign and much better performance.

You can find more information about all of the different releases on the official Magento website.

Over the years Magento has become more and more popular among its competitors and now it holds one of the top leading positions in the eCommerce field. You can see the application market share on the following chart: 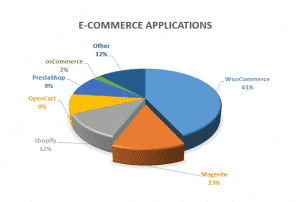 As you can see Magento is placed right after WooCommerce by the customers using the application. This is due to the fact that WooCommerce is an e-commerce plugin designed for WordPress, which is one of the most popular open-source scripts worldwide.

As a conclusion it is good to say that Magento is a great application giving you the opportunity to create a reliable e-commerce platform with extendable core and customizable appearance. It is appropriate both for entry-level users and experienced web developers.

Magento is not right for you?

Which are the different product types in Magento?
How to install Magento manually?
How to create a backup of your Magento store?
How to integrate Google Analytics in Magento?