PhpBB is a great script for online forums and is one of the most widely used ones worldwide. A great advantage is that it is totally free to both download and use, due to the fact it is fully open-source. It includes many amazing features for managing Internet discussions and that is one of the factors, which enhances its dynamism.

You will also be amazed by the dedicated community of users, who can assist you as well as help enormously towards the continuous improvement of the project by contributions with content like MODs, Styles and Extensions. This is also one of the main reasons which make this application exceptional, compared to its counterparts. Additionally, phpBB is very easy to manage and administer.

The application was created in 2000 by James Atkinson as a basic online forum for his own web page. Then two other members joined – Nathan Codding and John Abela, and the initial team of phpBB was formed. Soon after, in December 2000, a fully functioning version of the script was released.There were many subsequent improvements, with the pbpBB 2.0.x version made from scratch being released in April 2002, whose support ended in 2009.

The latest major upgrade of the script, phpBB3, which was released in 2007, acts almost like a brand new application and even though there are novel features in it, the conversion of phpBB2 to phpBB3 with the full content and current users is completely free. Meanwhile, in the late 2016 was released the latest version of the script – phpBB 3.2.x, which introduces certain changes and a variety of new functionalities, such as the PHP 7.1 compatibility, better support for emojis, etc.

All these features and amazing history of continuous development have made the script the most popular one for websites, using message boards. You can verify this by checking out the chart we have created in order to compare the phpBB market share with other applications with the same purpose: 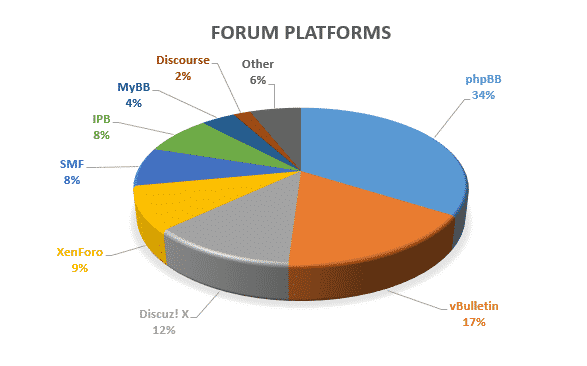 phpBB is not right for you?

How to set forum under maintenance?
How to administrate forum users?
How to modify your vBulletin avatars, post icons, smilies and BB Code?
How to change vBulletin themes?
How to install vBulletin?
vBulletin Introduction

How to keep phpBB secure?
How to upgrade phpBB 2 to phpBB3?
How to create a backup of phpBB?
How to install languages in phpBB?